Kodian Trio, with Colin Webster on saxophone, Andrew Lisle on drums and Dirk Serries on guitar have been playing together in various formations over the years.
The trio came over on 24 march 2018 to record their third album ”III”.
This was released on 27 september 2019 on Austrian label Trost Records.
The first two tracks were also recorded for their White Noise Session videos. 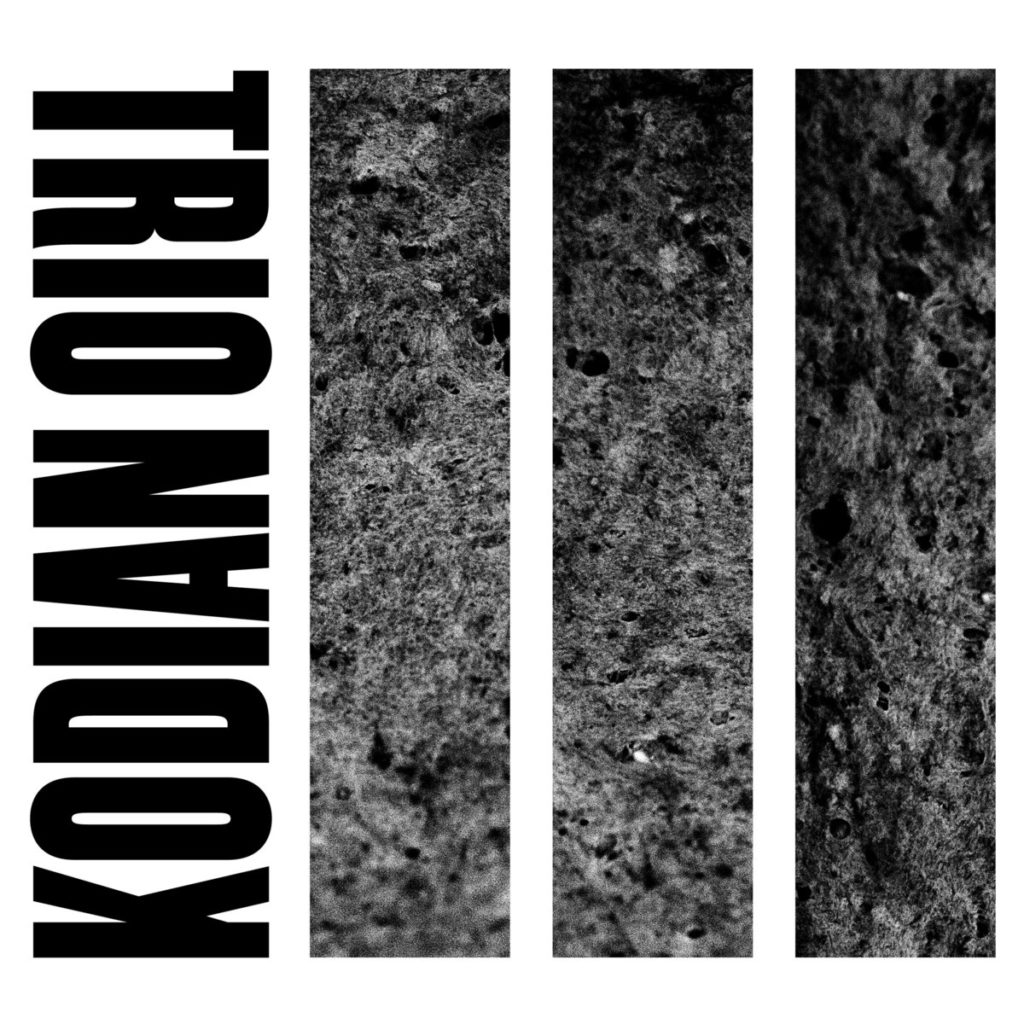 Colin Webster and Dirk Serries came to the studio before, for ensemble recordings like Dead Neanderthals – Prime and Fantoom – Sluimer . They both did a White Noise Session too. For Andrew Lisle it was the first time in the studio, although I worked on either mixing or mastering of several recordings on which he played.

So I had a pretty good understanding of how everyone played and how they sounded which helped in the recording setup.

Andrew brought his own cymbals to the session, but no drums. So he picked drums from the studio’s expanded drums line up .
It ended up being a Frankenstein drumkit:

Andrew chose the next drums:
Pearl BLX Birch 22×16 Bassdrum with Remo Ambassador head.
A Pearl Masterworks 12″ Maple tom with emperor batter head.
A Pearl Forum 16” floor with renaissance head.
And a Pearl Masterworks 14” maple snare with ambassador batterhead..
So this all was tuned to a high open jazz tuning and this mish mash of wood types, depths and drumheads sounded as one coherent kit…..

I didn’t wanted to go too complicated on every instrument since the three all played together live in the same room and there definitely was going to be some bleed.
I got inspired by the awesome Miles Davis at The Island Of Wight video for the drum setup. That gig had Neumann’s u67 / u87 for sax, trumpet and drums.
On an outdoor festival. Try that in 2019..

The drum setup in that video looks like a Glynn Johns mic setup.
This means in a short explanation: One condenser microphone at the side of the floortom aiming at the snare and one mic above the snare aiming downwards. That’s about it. ( Check his autobiography on this setup)
I used a Neumann TLM103 for the ”above snare” mic and an Audio Technica AT3525 for the ”floortom side” mic.

I used a couple of additional mics for the recording of the drums in the Kodian trio session. A Rode nt1 was placed in front of the bassdrum to have a nice even triangle between the Glyn Johns mic and the front of the drumkit microphone.  All three mics are at the same distance for eachother. This is a setup you see more often as an extra mic for the Glynn Johns setup.

Just as in that Miles Davis video, I added a mic under the main crash cymbal between the high tom and the hihat to capture the cymbal, tom and snare.

With a setup like this, you have to be sure the drummer can really play well and has good internal balancing.
And since Andrew has this and then some more, it worked really well.  An extra sm57 on the snare was added as the only close mic for the drums.

These were actually pretty simple. I chose the best dynamic I had for the guitar, which is a Sennheiser MD409 U3. After checking and trying out a few different positions the sound was great. For saxophone I first tried a Sennheiser MD421 since I had good experiences with that mic on Colin’s sax before. But I swapped it for a condenser tube microphone, the BPM CR76, because in this setting it matched the other instruments best. You can see the MD421 laying on the drum carpet in the video.

The room mics are two Sennheiser md21 omni dynamics which I put up right against the corner absorbers at both sides of the drums, facing away from the band. This was done to add some warm room vibe if I felt it was needed in the mix.

The mix was actually done already for a large part by the used mic setup. So the actual mixing was more or less about cleaning where needed and creating a bit more space for each instrument to sit in.
I used both hi- and lowpass filtering for the saxophone to get rid of some unwanted cymbal bleed and unwanted low end bleed of the drums.
A tad of upper midrange was added to push both guitar and sax forward.

The most heavy use of plugins was done in the overheads and room mics. The roommics got some heavy compression and were lowpassed a bit to add overall warmth to the track. The overheads were snare snares heavy. I wanted to have the bottom snares of the close snare mic because they sounded best to me and together with the overheads this was a bit too much. So dynamic eq was used  to dip around the 6000-7000hz range in the overheads to create room for those frequencies from the snare close mic.

All in all this was a great session by great players! Check out their facebook page for upcoming gigs and check them out! And buy their album 😉

The @presonus Fat Channel XT is free with any purc

Pearl drums hardware is the best ;-)

Spiffy looking! But what is it? New video in the

The JMG Sound Orbitron is a multi #modulation #eff

RME's Babyface Pro FS is the most portable #audio

The @wavesaudio NX Ocean Way Nashville plugin is a

Over the course of 2020 I reviewed many #plugins a

A #drum replacement tool can be a lifesaver when y

The @wavesaudio CLA EPIC is 4 #delays and 4 #rever

@steinbergmedia has released #cubase11 which featu

@audiothing Wires is a #tapedelay #plugin but with

Got a question on how to do telephone or old radio

New video up! 3 #free #vstplugins i use on every p